We raised our concerns about the widespread (mis)use of “Cyclists stay back” stickers over 6 months ago , sent a letter of complaint with our colleagues the CTC (the National Cyclists’ Charity), the London Cycling Campaign, RoadPeace, and the Association of Bikeability Schemes, followed by another complaint due to an inadequate response by TfL . And then TfL chose to give yet another – let’s say “inadequate” again because we try to be polite – reply to press enquiries rather than replying to us directly. By now, even seasoned campaigners were getting annoyed.

But yesterday RDRF and the other organisations involved, plus representatives of the London Boroughs Cycling Officers Group, attended a meeting at Transport for London chaired by Lilli Matson, Head of Strategy and Outcome Planning, with nine other TfL officers concerned with safety, freight and fleet operations, buses, taxis, and marketing and communications. We are glad…

In the Telegraph report on Eric Pickles’ changes to stop local councils from using CCTV to issue fines to drivers that park illegally, there is the following line:

“Ministers are trying to ease the policing of parking, as they believe it often makes driving to shops too difficult and forces people to go out of town or online.”

The assertion (unattributed, but doubtless made by a press officer or adviser) is contradicted by the conclusions of a report called ‘The relevance of parking in the success of urban centres’, one of which is as follows:

‘Mary Portas in her review into the future of high streets recommends that:

The problem is that there is no such thing as ‘free’ parking.

All the research reviewed, including that sponsored by industry associations such as the British Parking Association highlights that somebody has to pay for the development and maintenance of parking spaces, as well as the management of any enforcement regime to ensure their efficient use. This cost may fall to developers and private businesses in the case of shopping centres or large retail stores. Most on street parking is the responsibility of local authorities and therefore it local taxpayers who pick up the cost of provision if revenue is not sufficient to cover costs.

As Shoup and the COST Report indicate, the introduction of ‘free’ parking often does not have the desired effect in terms of increasing visitors or shoppers to any area. In fact, it most often leads to a reduction in turnover of spaces, i.e. longer parking stays mean less visitors per day, with the most usual beneficiaries being local workers. This means that retails sales reduce rather than increase. ‘

A typical government decision – based on what will look good on the front pages, rather than on evidence.

At the CTC’s debate on sentencing in road cases, Simeon Maskrey Q.C.,  a Deputy High Court Judge and Recorder of the Crown Court, called for the burden of proof to be changed in road crime cases.   Where it has been established in court beyond reasonable doubt the driving at the time of the offence was dangerous or reckless, the defence should have to prove to the satisfaction of the judge or magistrate passing sentence that the driving wasn’t deliberately dangerous, unlike at the moment where the prosecution is forced to prove intent.

In conversation with me after the event, he also called for more innovatory options to be made available to judges & magistrates for sentencing in road crime cases. An example he gave was the option of banning someone until such time that they had undertaken a 2 week road danger course, which the offender would have to pay for themselves, in which they would have undertake study and training in road danger reduction.  I like the idea, even if the practicalities are a little fuzzy.  Maybe a component could be doing the CTUK trainers’ course, which lasts 4 days, and costs £400.

The debate was well-attended, with representatives of the Crown Prosecution Service & the Ministry of Justice present (at one point the CPS rep got up to try to directly refute Martin ‘Cycling Silk’ Porter’s accusation that the CPS routinely opt for charging drivers with careless driving instead of dangerous driving as the easier option).

The panel was impressive, including 2 senior legal academics, 2 Q.C.s and chaired by Kaya Burgess of The Times.   The debate was a little dry, with great focus on strictly legal issues which were slightly beyond the knowledge of this correspondent.  Cynthia Barlow M.B.E. of Roadpeace afterwards expressed some frustration that the voice of the victims of road crime was not adequately heard.

I was struck that the person on the panel with the most radical ideas was a senior member of the legal profession, Mr Maskrey. He came across as one very angry man, even if his proposals and propositions appeared to me to be soundly rooted in legal principle and not easily dismissed as merely the intemperate rantings of a pissed-off cyclist.  I think most people would agree with his statement, made early in on the debate, that if you have used a motor vehicle as a weapon, either with the intent to deliberately harm or else to intimidate another road user, you should not be allowed to retain the privilege of operating a motor vehicle on the public highway. (I have paraphrased his words, but this is essentially what he said.)

He also spoke of the importance of prosecuting for ‘minor’ driving offences, such as infringing into bike lanes, which, in his view, will inform the driving public that deterring such offences, whilst those offences may appear trivial, are part of society’s efforts to create a safe & welcoming environment for all road users.  He also stressed that, in his view, habitual dangerous behaviour by drivers, (overtaking on a blind corners was the example that he gave – but it could equally be applied speeding in residential areas) which may not always result in a collision whose outcome is catastrophic, should be treated by prosecuting and sentencing authorities as dangerous and criminal whether not the outcome is injury or death.

CTC has published their much more extensive synopsis of the debate, entitled “Sentencing Debate sparks call to email Justice Minister” 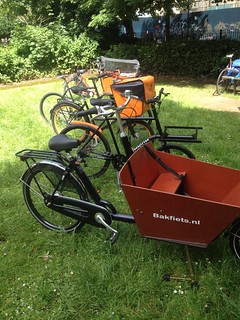 I went to the Hackney Cycling Showcase last Saturday, partly to catch Brian Deegan’s talk about the ‘light segregation’ scheme that he designed for Royal College Street (more about which in a separate post soon), but also to meet with Roman of London Green Cycles.

He was there to exhibit some of the many freight cycles and cargo bikes that London Green Cycles offer.  Here are some of them.  In front, the Bakfiets, which is probably the best known cargo bike in London.  Behind, the Omnium Mini, the bike with the big orange box is Bicicapace, with is a utility with capital ‘U’ and the last two wheeler is the Omnium Cargo, which is more or less a straight copy of the Bilenky Trashpicker.

I rode all of them, and they are all great bikes, fun to ride, and well-designed.  Surprisingly, my favourite was Bicicapace. I must be getting old.

More on “Cyclists Stay Back” stickers, including some evidence that they are already being used by vehicle operators to excuse negligent behaviour by drivers…

Transport for London (TfL) has today taken its behaviour over the “Cyclists stay back” stickers farce to a new low. We believe it has shown contempt for the main cycling and danger reduction organisations who have tried to get it take a rational approach to this issue: